The Vaping Risk: Clearing the Air 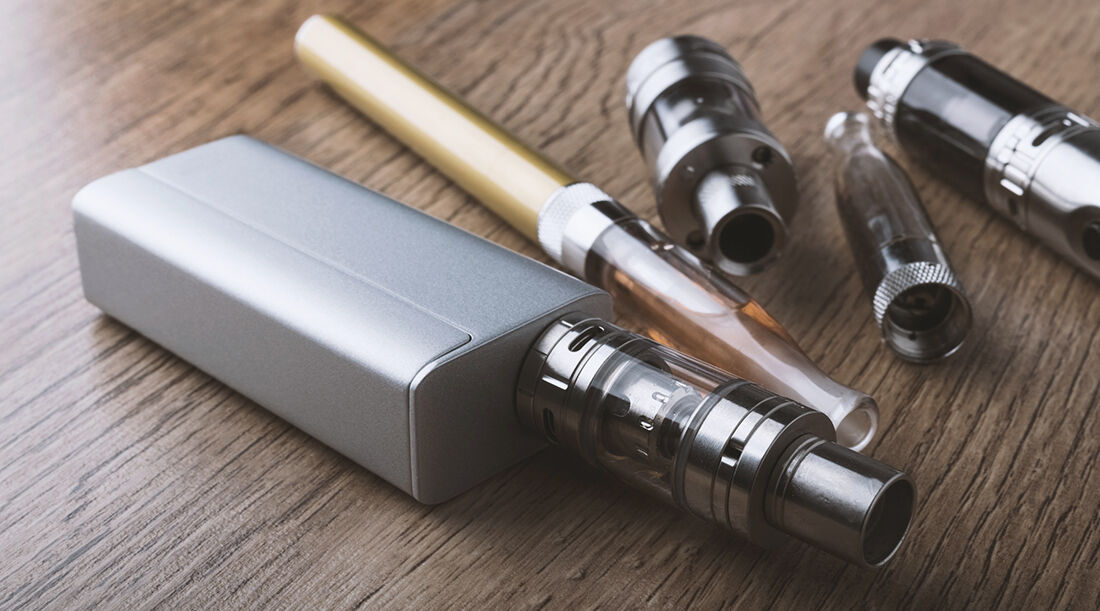 Now well into their second decade, electronic cigarettes (e-cigarettes) that produce a vapor (hence the term vaping) remain both popular and controversial, with some believing that e-cigarettes are a relatively safe and non-toxic alternative to puffing on tobacco, while others believe that e-cigarettes can have direct and harmful effects to the smoker, as well as those around them.

Despite debate, e-cigarettes have become quite popular. In Canada, where the government legalized e-cigarettes in 2018, user rates are on the rise, and vaping has become most popular among current and former cigarette smokers. This popularity has translated into booming business and the biggest of the e-cigarette manufacturers, the American company Juul, reported sales of over $1 billion in 2018, up from $200 million in 2017 (1).

So why the fuss? Well, there is the issue of health and safety; Health Canada seized 60,000 non-compliant vaping products between July and October of 2019 (2). There is also the problem of the promotion and normalization of nicotine-based e-cigarettes to youth, which could give rise to a new wave of nicotine-based illnesses. Teen vaping has doubled in the past year alone and recent surveys have reported that nearly 40% of 16 to 19 year olds have tried vaping and 1 in 10 teenagers continue to vape on a weekly basis (2). Many vaping companies have promoted sweet-flavoured aerosols such as mango, cotton candy and bubble gum, enticing younger consumers to use their products (3). Many of the pods contain the equivalent of 20 regular cigarettes. However, approximately two-thirds of its users between the ages of 15 to 24 are unaware of this highly addictive nicotine additive (3). And although scientists are still learning about the long-term health effects of e-cigarettes on kids, teens and young adults, it cannot be argued that nicotine itself is highly addictive and can reduce brain development in youth, specifically affecting areas of the brain that control attention, learning, mood and impulse control. Not to mention the fact that some of the ingredients in e-cigarette aerosols can be harmful to the lungs in the long-term. For example, e-cigarette flavours can be safe to eat, but dangerous to inhale since the gut can process far more substances than the lungs (3).

In an effort to control the vaping epidemic amongst teens, there is currently a partial vape ban in the U.S. on certain flavours of pre-filled pods; these cartridges are designed for single use, and flavoured pods, especially mint (4), have been consumed by teenagers at an alarming rate. However, many products remain vastly available including open-tank systems and thousands of flavoured e-liquids not in pod form – all commonly found in vape shops and many convenience stores (5).

New and frightening concerns emerged in 2019 when several dozen people in North America died and more than two thousand people sustained respiratory injuries related to vaping. In the majority of these cases, the lungs were compromised after using THC (the psychoactive ingredient in marijuana) as well as nicotine and non-nicotine vaping products. Many of the instances were also connected to non-regulated (black market) products that may have contained toxins such as pesticides or other harmful substances such as vitamin E acetate, a thickening agent most often found in black-market vaping products (2).

Today, the battle rages on between coalitions of regulators and health professionals on each side of the vaping divide, arguing the merits of a potentially safer alternative to traditional cigarettes versus a growing number of serious illnesses or deaths directly linked to vaping. Within the realm of insurance, underwriters and actuaries use long-term studies and data to make insurance assessments and decisions. But in the thickening haze of the vaping controversy, the benefits versus detriments of vaping remain unclear – it is simply too early to tell. At the moment, the consensus within insurance underwriting is that the risk premium for vaping is on par with that for cigarette smoking, but of course, this can change with time and additional knowledge. Stay tuned as we continue to follow this topic.

(3) U.S. Department of Health & Human Services. Centers for Disease Control and Prevention, Quick Facts on the Risks of E-cigarettes for Kids, Teens and Young Adults. February 3, 2020